We had a windy day, full of struggle, redemption, and victory. Words won’t do: here’re the photos! 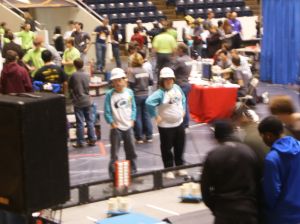 It took me a while to understand the rules here, but in a nutshell: teams receive a kit, have to create and program a robot, are allowed certain modifications, and then have to compete against other teams’ robots on a designed course. Points are awarded for various achievements, and deducted for penalties (ex: you can’t trap a competitors robot with your own).

We arrived Friday afternoon, where the team took a tour of the UVA campus, then set up at the University Hall in Charlottesville. The team was there by 7:30a Saturday. By the end of the day, the team was so tired, I’m surprized they were still on their feet. 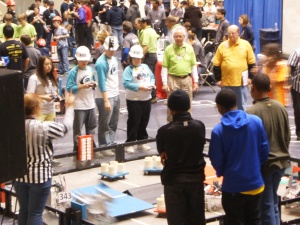 The Tornadoes did well (better than we expected, actually). I have great faith in us for next year! The big moment for us came in the finals, where the team was able to balance their robot in the autonomous round. No one’s done that before. The other teams moved to block us after the first time, but when the team pulled that off, it was a coup. The arena went nuts. Here’s Middle Son, showing his team spirit:

Youngest Son is a bit more enthusiastic than he is talented, as far as the sport of soccer is concerned. But we get out on a Saturday morning, and the weather has been quite nice for the games, and we get to interact with other parents and children on a level we aren’t able to at PTA meetings and parent-teacher conferences. Last weekend was especially nice, as Youngest went home with a friend to spend the night, and Hubby and I got to stop at Art 2010 on the way home. (Wow, there are some talented artists in Richmond. I’m jealous, I admit. I wish I had some skill like that.) And the team that beat Youngest’s team 2-1 is the 3 year league champs, so Oldest magnanimously congratulated Youngest on only losing by one. In his mind, that’s a win.

I have a problem with cell phones. I can’t seem to hang on to them. Last summer, I jumped in the pool with my phone. Smart, huh? One time, my youngest used my phone to stir the commode. Fun. One phone dropped (along with the rest of my purse) into the Chesapeake. (Hey, it was either the kid or the purse!) The purse was eventually recovered by my father, but the phone was a wash (nyuk, nyuk). Maybe my problem isn’t with phones, but with water? Hmmm… Nah, the last one had a glitch in it’s whatjamacallit so I couldn’t charge it, and as I’d been through so many phones already, my insurance company wouldn’t pay for a new one, so I had to accept this POS loner for a few months until my contract renewed and I could get…. (drumroll, please!):

Now, I’m not too much of  a gadget geek, though I like a good toy as much as the next nerd. But as far as a phone goes, I don’t need it to watch TV or tell me when to turn left, or any of the new things these mortgage-the-house phones can do. I’m also leery of touch-screens. I don’t need to do much with my phone – I want to be able to talk on it, send the occasional text message, and play a good game of Sudoku or Trivial Pursuit when I’m sitting around bored. This phone works great for that.

I also want to carry a photo or two of my kids around with me, which I FINALLY figured out how to do, after two email exchanges with Verizon and an hour or so of fiddling around on my own, as the emails from Verizon were essentially useless. But I finally figured it out, and uploaded some of my favorite kid pics, and now I’m happy.

What I’ve read about this phone online is that it’s a good “starter phone”, basically a cheap option for your teenager so they can Facebook and send a thousand texts and whatnot. Well, I’m not a teenager, I don’t send a thousand texts, and I don’t Facebook. This phone works great for me anyway. The keyboard is clumsy, but what pint-sized qwerty keyboard isn’t? It’s much better than hitting the number keys over and over like I used to. The camera isn’t the best, but again, it’s a phone. I have a camera when I need a camera. It’s nice that the camera option is available if I get caught unawares, but I’m not planning on having a gallery opening or anything, so this camera works fine for me. The screen is lovely, the flip-out keyboard is fun, my oldest son says he hates me because he likes my phone better than his, and the coup de grace, it was free. (Well, I had to sign up for another two years, but I was gonna do that anyway.) What more can one ask for?

Posted in Goofy Crap I Do, reviews

Back to the Blogosphere

Scalzi said it was a rule that when you start a blog, or restart after long absence, there must be a pic of a cat. So here you go:

It’s been over a year since my last post. Things are pretty much the same. Same husband. Same kids. We’re all just a little bit older now. New dogs!

The famdamnily returned from a vacation at Bryce Resort last week. Honestly, it was kinda boring, as we don’t play golf and that’s about all there really is to do around there. The nearest town (Mt. Jackson) is about 15 miles away on twisty mountain roads. But we had the pool, a nice townhouse, beautiful weather, and the highlight of the trip, the zipline.

It took about an hour for 10 separate zips. The boys loved it.

And then there is the beautiful scenery of the Shenandoah mountains. 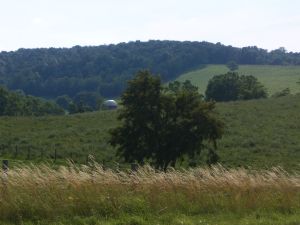 All in all, a good trip.

Richmond weather is going to kill me…

A week ago, there was still snow on the ground, but it was 75 degrees and my children went to school in shorts. We had three or four days of summer, but now it’s 40 degrees and raining.  No wonder I’m sick.

Hubby is in Indianapolis, but he’ll be home tonight and we have a romantic weekend planned in Williamsburg. I’m sure he’ll be feeling romantic when I snot all over him. Ew.

WordPress has spoiled me, I guess, as everything here is easy to see and read, and manipulate. Facebook just looks like too much info crammed into too small a space (half of it advertising). But I suppose it’s better for meeting new people than a blog.

Any advice on how to use Facebook to my best advantage is welcome.

In other news – I’m still alive. I have been out of it for a good long while, but then I remembered how much I used to enjoy this site and wondered why I’d let it go. Winter blues, maybe. In any case, I have a few new adventures to post about – as soon as I go find out why Middle Son is screaming for me….

My son went to school today in tears.

The snuffling, I Can’t Breathe kind of tears that wear a person out.

I can’t find his shirt. This is the reason my son can’t breathe.

I have torn this house apart. I have looked at every scrap of fabric that could maybe be his choir shirt. I’m exhausted from the search. The house is a mess. That shirt is simply not here.

He is singing at City Hall today, and I can’t find his shirt.

I have called all the people he’s seen in the last month – grandparents, uncles, etc. No shirt. I have looked in every closet, every laundry basket, every pile of clothing stashed behind the bed so Mom doesn’t see it. I have pulled out the ‘one day I’ll actually take this box to Goodwill’ box. No shirt.

He has no choir shirt. And he has three choir performances this week. I feel sick.

I called his teacher, and she has an extra that he can wear today. Disaster staved off one more day.  She gets to be the one to tell him his life isn’t over (he’s 12, see, so finding a shirt for him means new life).  But we have two more to go.

Where the HELL is that shirt!

Someone Threw a Shoe at My President.

I did like the way he threw a ball. Well done.

I didn’t like the way they wage war. I think they were unjust.

But when my President had to duck from a shoe, I was embarrassed for my country.

Whether I like the man or not (And I think I do; while I strongly disagree with him, I think I actually like him), who was watching out for Our Man? The best trained defense force in the history of the world let some angst-ridden idiot throw not one, but both shoes at My Man?

I’m a little stirred up about that.

No matter what else, he is the President of the United States. He has earned and deserves my respect. I could not do his job, and he did better than I ever would have. He has earned the respect of his position and title, and all proud Americans will recognize that.

I offer my sincere apology to my President. If I had been there, I would’ve tried harder, been better. I wouldn’t have let you be embarrassed that way.

Because whatever ‘lame duck’ jokes get passed down, you did what I could never have done, and in a crazy time. I think history will treat you more kindly than the current world is doing. I think the future will show your worth.

Don’t get me wrong – I campaigned for Obama. But I love you. You are my President. You took me through some tough times. (Occasionally, you did it with a really silly face.)

I am a Patriot. You are the President. I would die for you, as you are more important than I am.

Youngest Son is in the other room, practicing on my guitar. I’m torn by this.

I’m happy he’s getting music lessons, as I can see that music will be a large part of his life, as it has been for generations of his family before him. His uncle is a producer. His mother and grandmother are known for their singing. His great-grandmother and great-great-grandfather were respected pianists. His great-great-uncle was the Tin Man in the original Wizard of Oz. (No, really.)

But he’s playing my guitar.

See, this guitar is a Tacoma hard body, folk size, and I spent a summer working for minimum wage many years ago to buy this baby. Mother of pearl inlays. Acacia solid top. Gorgeous. I tremble when I think of the damage my seven year old can do to her.

Middle Son is playing drums. There’s not much more to say about that. Other than, perhaps, “Eeep.”

Oldest Son has decided to play sports (soccer) and chess. And join the drama club. He’s so cool.

I have to admit, I am terribly excited by this time in my sons’ lives. They’re learning passion. Music, art, sports, drama – a whole world is opening up for my boys, and I adore being the one allowed to watch.